The almost-free and potentially viral notoriety generated by some April Fools’ Day jokes is enough to get even the most unlikely of ecommerce businesses to take otherwise unthinkable risks in a daring attempt to get in on the action.

While there are a gamut of April Fools’ pranks pulled off by retailers and tech companies in top-ten lists (like Amazon’s 1999 Interface Redesign, Groupon’s GroUBER, and ModCloth’s DIY Toupees), the effectiveness of these antics with respect to website traffic, brand imprint, or even customer acquisition is questionable to say the least.

We decided there just had to be some that impacted business positively, so we dug-in and unearthed a few that actually helped companies make the grade. Enjoy!

Here’s a nifty example of effective brand engagement. Online marketing company Blue Corona, which specializes in lead generation, flipped their business model on its head in 2013 by launching a tongue-in-cheek website that offered a solution for customers who were getting too many leads because of the company’s great work.

On April 1, 2013, men’s clothing retailer Bonobos released a video for the “Girlfriend Jean”, which riffed on the boyfriend jean trend. The tagline? Because sometimes a guy’s favorite pair of jeans aren’t guy jeans at all.

The idea for the video was developed in-house and even starred a Bonobos team member. As it turns out, all Bonobos’ April Fools’ gags come from inside, where ideas are often sparked organically, usually during social events. 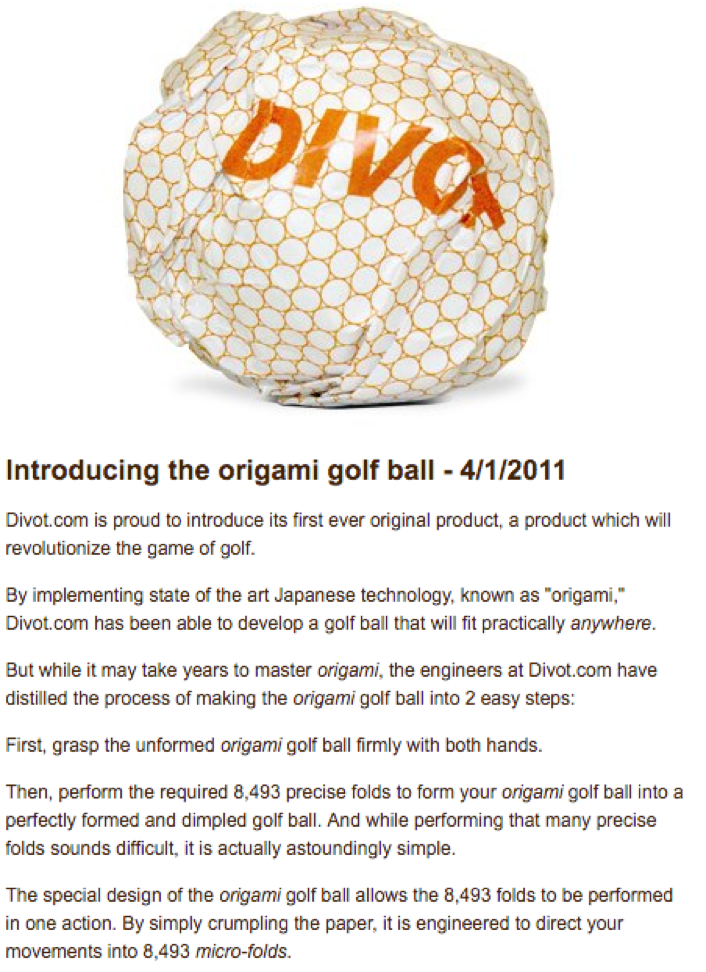 On a whim, Divot.com, a golf equipment ecommerce merchant, placed an origami golf ball up for sale on April 1, 2011.

Realizing the potential represented by April Fools’ Day, the retailer continued its antics with the Insta-Course in 2012 and the Exacto-Putt in 2013.

Divot.com also recognized an opportunity for customer acquisition: for those (unsuspecting) visitors who actually bought the gag product, the company gave them a selection of golf apparel, accessories, and equipment along with the original April Fools’ Day item. 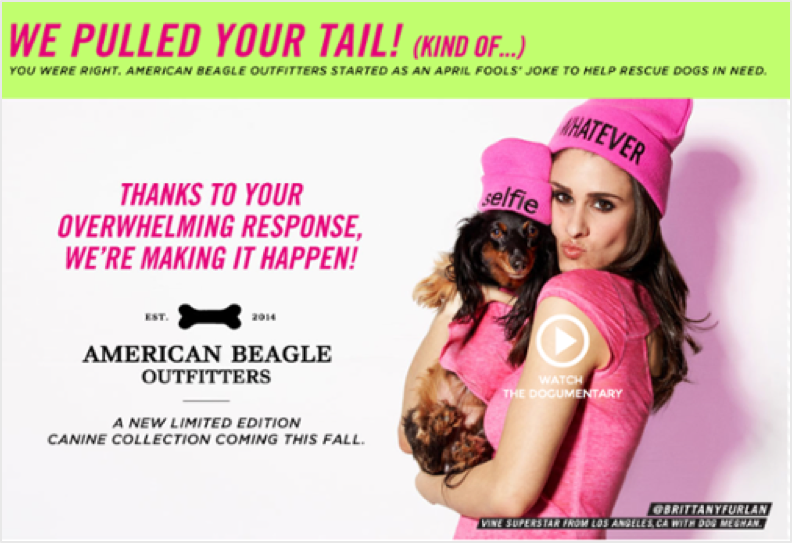 You often hear about those April Fools’ gags that seem so real they could actually turn into a real thing - they straddle that line of comic absurdity perfectly. While American Eagle Outfitters is not purely an ecommerce company, they provided a classic example of a joke turning serious.

The popular clothing retailer announced a new clothing line for dogs on April 1, 2014. It was met with such excitement that American Eagle decided to make it real.

Given that Google is one of the top pranksters of all time, we had to have at least one of its jokes on this list. Google and Nintendo’s 2014 collaboration might be the best April Fools brand video to date.

The zany Google Maps’ Pokémon Challenge video was a call for users to be “digital explorers” traversing the world to find and destroy elusive Pokemon using the Google Maps app. The winner got a much-coveted position at Google itself.

Clearly, many companies can’t resist using April Fools’ Day as an opportunity to grab people’s attention in a unique, humorous, and fun way. It may take some planning, but the payoffs can be worth it. Tell us about your favourite April Fools!