Home › Blog › Ecommerce Pricing Strategies – The Good, the Bad and the Ugly

Ecommerce Pricing Strategies – The Good, the Bad and the Ugly

When applied well, even small price changes can have a disproportionately large impact on your bottom line. In fact, one landmark study published in the Harvard Business Review found that just a 1% change in price could increase profits by as much as 11%.

To reach your full revenue potential, it is therefore necessary to spend time, effort and money on determining the perfect price for your product or service. To help you as you work towards finding the optimal price, here are a couple of common pitfalls to avoid followed by a few strategies to embrace.

It might seem to make sense to follow the crowd by mimicking your key competitors in terms of price. Unfortunately, it doesn’t really work. This is why:

Even more importantly, you have no guarantee that your competitors know what they’re doing in terms of due diligence in determining their pricing strategy.

Basing your price on development costs plus a profit margin is also, perhaps non-intuitively, not the best strategy.

Rather, you need to understand your customers and the perceived value they give your product without ignoring reasonable pricing expectations. This is exactly what Starbucks does really well.

The coffee giant is a master of employing value-based pricing to maximize revenue. The company uses research and customer analysis to formulate targeted price increases that capture the greatest number of consumers willing to pay without losing so many that it negates the added revenue from the price increase.

While revenue maximization as an objective may seem obvious to anyone running a business, it’s rare to see companies using a value-based pricing approach to effectively uncover the maximum amount a customer base is willing to spend on their product.

Research from Stanford is pretty clear in showing that asking consumers to compare products based on price can have unintended results.

Intentions when using comparative pricing are usually to maximize sales and market share usually by being the cheapest. The thinking being that, “Hey, my product will save you 25% when compared to this popular product, why not buy mine?”

Once again, the unpredictability of people strikes. While there is no doubt that comparative pricing can be powerful, it comes with risks. For one thing, the study found that when asked to make comparisons, consumers often feel they're being tricked in some way and, as a result, become more cautious and risk averse and in fact less likely to choose the cheaper option.

Keep this in mind the next time you directly compare your offering to your competitors. Instead, you might benefit more from highlighting unique strengths and placing an emphasis on (for example) time saved over money saved.

1. Price to Meet Your Objectives

Different businesses have different growth objectives and revenue targets. These need to guide your pricing strategy.

For example, a business that’s highly focused on gaining market share may choose an aggressive ecommerce pricing strategy to undercut the competition, even if the result is a temporary decrease in revenue and profits. As you can imagine, these tactics are pretty cut-throat.

Alternatively, well-established businesses with strong brand recognition may want to capitalize on the psychological appeal of luxury pricing and maximize revenues with prices that are somewhat higher than competitors. (To be clear, testing this type of pricing is always a good idea if it is new to your business.)

Starbucks also employs this strategy. Rather than trying to compete with cheaper chains like Dunkin’ Donuts, Starbucks uses price hikes to separate itself and reinforce the premium image of their brand and products. 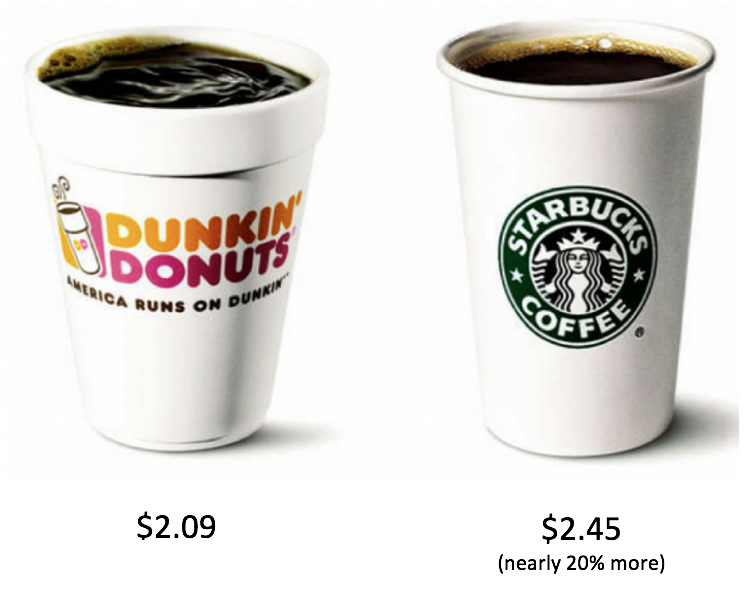 Starbucks’ loyal following isn’t especially price sensitive and, as a result, their coffee maintains fairly consistent demand meaning that a small price increase can have a significantly positive impact on their margins without decreasing demand.

2. Contextual Pricing and the Power of Perception

The result was that it seems to strike people as inherently unfair if they are required to pay the same price for a beer from both places – even if the beer itself is exactly the same. - and participants were more likely to opt for the beer from the resort at a higher price.

2. It’s relatively expensive therefore it MUST be more valuable!

One of Robert Cialdini’s case studies in his best-selling book ‘Influence’ also discusses this phenomenon. A local jeweler sold out of turquoise jewelry when it was accidentally priced at double its initial price, instead of half (which was the price the jeweler had intended for her sales event).

It would appear that the inflated price made the jewelry irresistible to buyers. It was relatively higher in price when compared to other jewelry and, in context, was perceived by the customers to have a “higher value” without any explanation or validation.

In Cialdini’s new book, ‘Pre-suasion’ he talks about priming as being heavily influential. For example, the best way to sell a $3,000 suit is to lead with $10,000 suit. In the same vein, a $60 dinner doesn’t look quite so bad when anchored next to a $300 dinner.

(Note that the practice of positioning the most expensive option first is another example of price priming in action.)

Enter pricing psychology tactic number one. Otherwise known as charm pricing, the nine factor is one of the most widely used and oldest pricing practices. Ending prices with .99 or .97, or a little less than a round number, is a psychological tactic that profoundly affects buying decisions.

The motivation behind this is obvious: to make the price seem lower. But is it effective? Yes, resoundingly so. In his book Priceless, William Poundstone dissects eight different studies on the use of charm pricing and found that, on average, they increased sales by 24% versus ’rounded’ price points. What a pleasure! Here’s more on the Pricing Power of Nine.

Studies also show that people ‘see’ numbers with dollar sign ($) and decimal points as being bigger. Odd but true. For example, if faced with choosing between a product listed at “$1000.00” or one listed at “1000,” most people would psychologically perceive the latter as being a lesser number.

The reason behind this seemingly irrational perception is that we subconsciously associate longer verbal lengths (when we internalize the price in our mind) with higher values.

A study by Cornell provides an excellent example of the lack of the use of currency symbols on menus. Interestingly enough, people spend more when there are no dollar signs in this industry. This is the case; from popular family dining…

5. The Bonus of Bundles and Decoy Pricing

Behavioral economist Dan Ariely, the author of Predictably Irrational, continually uses his research findings to show us that we’re really not as rational as we think we are when we make decisions.

An example concerns an ad The Economist ran a few years ago in which they offered three subscription options:

At this point the print only option doesn’t seem to make any sense. It’s redundant. Who would want print only when they could have print AND web for the same rate? If that’s what you selected, you made the same decision as 84% of Dan’s MIT students. It’s a heck of a deal, right?

So, being that the print only option seems to be entirely useless, Dan removed it and ran the test again on a different group of MIT students. They were presented with this choice:

In this set, it’s now not nearly as attractive to spend an addition $66 on print. And if that’s how you feel, you’re the same as 68% of the students.

Interestingly, that pesky middle ‘useless’ option wasn’t entirely useless. It generated a significant amount of additional revenue by placing the third alternative in a much more positive light. It was, in fact, a decoy bundle. This practice is also referred to as price anchoring.

Here’s the talk and the full transcript.

Your price should be easily accessible and understandable for your products. Customers will appreciate transparency in all pricing decisions and, if this transparency is well-established, it will be easier to raise your prices in the future.

Dynamic pricing, already widely used by airlines, hotels and the entertainment industry, automatically adjusts prices on ecommerce sites with algorithms that gauge the volume of demand. The higher the demand, the higher the price.

For example, on any given flight, there’s a good chance that no two bookings were the exact same price. Understandably, higher demand for later departure times or around holidays can dramatically affect how much you pay.

While this does seem to contradict transparent pricing, it has strategic value of its own in that it ties in very strongly with the idea of pricing based on your customers’ perceptions of the value of your product.  When employing dynamic pricing, you are effectively allowing algorithms to match your price with your customers perceive worth of your product (and what they are willing to pay) so you can maximize your revenue.

For ecommerce stores, this is easy and it’s necessary. Testing is also not just limited to testing the actual price itself. Consider all of the following:

1. The Positioning of Tiered Pricing Products

We know that the paradox of choice means that people make more efficient decisions that result in higher levels of customer satisfaction when presented with fewer choices (despite our desire to want to know all the options, we actually struggle to make decisions when presented with them.)

Various tests have shown that businesses presenting three alternative prices for variations of their products on a page (think bronze, silver, platinum options), have found different positioning helps sell more of the product they actually want to sell.

With respect to positioning and simple landing page optimization, the way you display these offers will also probably impact your revenue and sales numbers. Consider this test where the vertical stack beat the horizontal product line up by 16.4%.

There are tons of factors that go into perfecting the price of your product and these are all ways that can help get you closer to finding the perfect price to charge for your products. Avoiding simple pricing strategies like mirroring the competition and cost-based pricing in favour of pricing focused on value and shopping psychology will help optimize your returns. In addition, by employing a testing mindset to truly understand what price will resonate most with your customers, you will be able to charge the price that best grows revenue for your business.