Home › Blog › SaaS Metrics: How to Calculate Your Quick Ratio

SaaS Metrics: How to Calculate Your Quick Ratio

Investors have been embracing SaaS businesses in a big way in recent years. One of the biggest reasons is the promise of stable, recurring revenue over an indefinite period. This is in addition to the huge opportunity presented by a rapidly growing appetite by businesses and consumers for cloud-based software solutions. If done right, a subscription model can increase the total amount of revenue earned by software companies and, by extension, investors while also providing users with ongoing value.

But with this increased attention from investors, SaaS companies now find themselves needing to be fluent in a number of KPIs not normally used in non-subscription software businesses. In addition to customer lifetime value, monthly recurring revenue and churn, another indicator has emerged to gauge the long-term viability of SaaS companies: the quick ratio.

Described by venture capitalist Mamoom Hamid at this year’s annual SaaStr conference, the SaaS quick ratio compiles data in a way that helps to determine if a company is likely to be a profitable investment. As an example, Hamid used this metric to help make a decision about investing in Slack, which had a high quick ratio and then proceeded to grow to over $10 million in annual recurring revenue (ARR) in just 11 months.

The SaaS quick ratio stems from an accounting concept which measures a company’s short-term liquidity by comparing assets and liabilities. For the quick ratio, however, the “good” SaaS metrics that indicate recurring revenue growth are measured against “bad” metrics that eat away at recurring revenue. Specifically, the sum of upgrades (expansions) and new acquisitions are measured against the sum of cancelled contracts and downgrades (contractions):

Unlike measuring churn or MRR alone, this ratio can be telling for SaaS businesses who may post strong MRR growth or low churn but have significant underlying weaknesses. In one example Hamid presented, a company looked like a viable investment based on its expansion MRR. However, when churn was taken into account like the quick ratio does, it was clear that while expansion MRR was high, it was merely keeping the company afloat and net MRR was quite low. 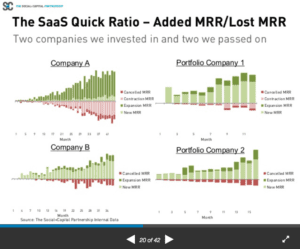 For a SaaS company to be considered a viable investment, investors tend to set a benchmark ratio of 4. In other words, the company must average over 4 times as much MRR added in a given period than MRR lost. Above that rate, companies have relatively good prospects for continued recurring revenue growth and are likely to be good investments.

For the best results, the ratio should be examined over different time periods to account for periodic variations. While in one month businesses may fall below the benchmark, a quarterly comparison may indicate substantial growth. However, if your SaaS business is consistently failing to achieve a ratio equal to or above the 4 benchmark, you may want to consider looking into product fit or better facilitating customer success.

Companies must also consider which stage of their lifecycle they are in before calculating their SaaS quick ratio for investors. Similar to churn, the ratio is irrelevant for start-ups in their first year of business who have many new customer acquisitions locked into contracts. This will only lead to an inflated ratio and subsequently, an inaccurate evaluation of your company.

The quick ratio ensures SaaS companies looking for investment can’t hide behind good churn or customer acquisition numbers alone. To achieve a SaaS quick ratio of 4 or above, companies need to make sure they are applying strategies that acquire, retain and upsell customers. Of course, there’s more that goes into an investment decision than just one metric. But a good quick ratio is a good indication to investors that your service is in demand and you have a solid process in place to successfully scale.