With cart abandonment rates hovering at almost 70%, your ecommerce store needs to be jumping on every opportunity to get shoppers to complete their purchase. One of the easiest, and arguably most underutilized, tactics to recovering those abandoned carts is sending a well-timed and relevant email after a cart has been abandoned.

Recovering even a fraction of the revenue potential of those abandoned carts can be a big win. Interestingly, well-timed emails can have a conversion rate of up to 6% and recovered purchases often have a higher average order value (AOV) than normal making them well worth the effort.

Essentials of a Cart Abandonment Email

Crafting an effective abandoned cart email starts with understanding why those carts became abandoned in the first place. Often, carts are left because of a distraction, there wasn't enough time to complete the process or something caused the shopper to hesitate.

But because people were close to buying before they were interrupted, many purchases can be recovered with a cart abandonment email. The best performing emails that recover the most revenue tend to have these 5 key elements.

The highest performing subject lines across 500 global brands were those that were personalized with the customer’s name or the name of the abandoned product with 46% and 44% open rates, respectively. Emails whose subject line included the merchant’s name, sounded like they came from customer service or had an urgent tone also performed well, with open rates of over 40%. 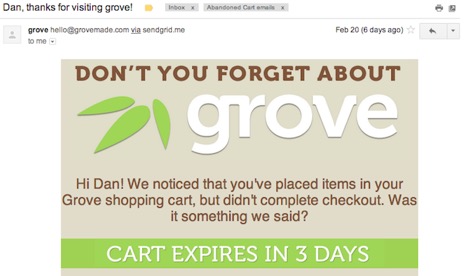 This email from Grove does a great job personalizing the email subject line and body of the email. Grove also deserves bonus points for creating a sense of urgency by mentioning that the shopper’s cart will expire in 3 days.

Apart from having the highest performing open rates, emails which included the customer’s name in the subject line also tend to se the highest conversion rates.

2. Sending at the Right Time

Research from SaleCycle, which analyzed the results of cart abandonment emails from 500 global brands, also found that emails sent exactly one hour after the customer abandoned their cart had the highest conversion rates, at 6.33%. Interestingly, sending an email at virtually any other time resulted in steep drop offs in conversions. Emails sent within an hour of cart abandonment only converted 3.14% of the time and emails sent later than one hour after abandonment (but less than 24 hours after) converted at an average of 3% of the time.

If your cart abandonment emails are sent more than 24 hours after the cart is abandoned then you’re losing out even more. Only 1.74% of carts are recovered at that point.

3. Include the Product Left Behind

The goal of every abandoned cart email is to get your customer back to your online store to complete their purchase. The reason they had added products to their cart in the first place was because they were interested. That’s why your email should prominently show off the products that were left. Large images and detailed descriptions will ensure the customer knows exactly which products you’re talking about. 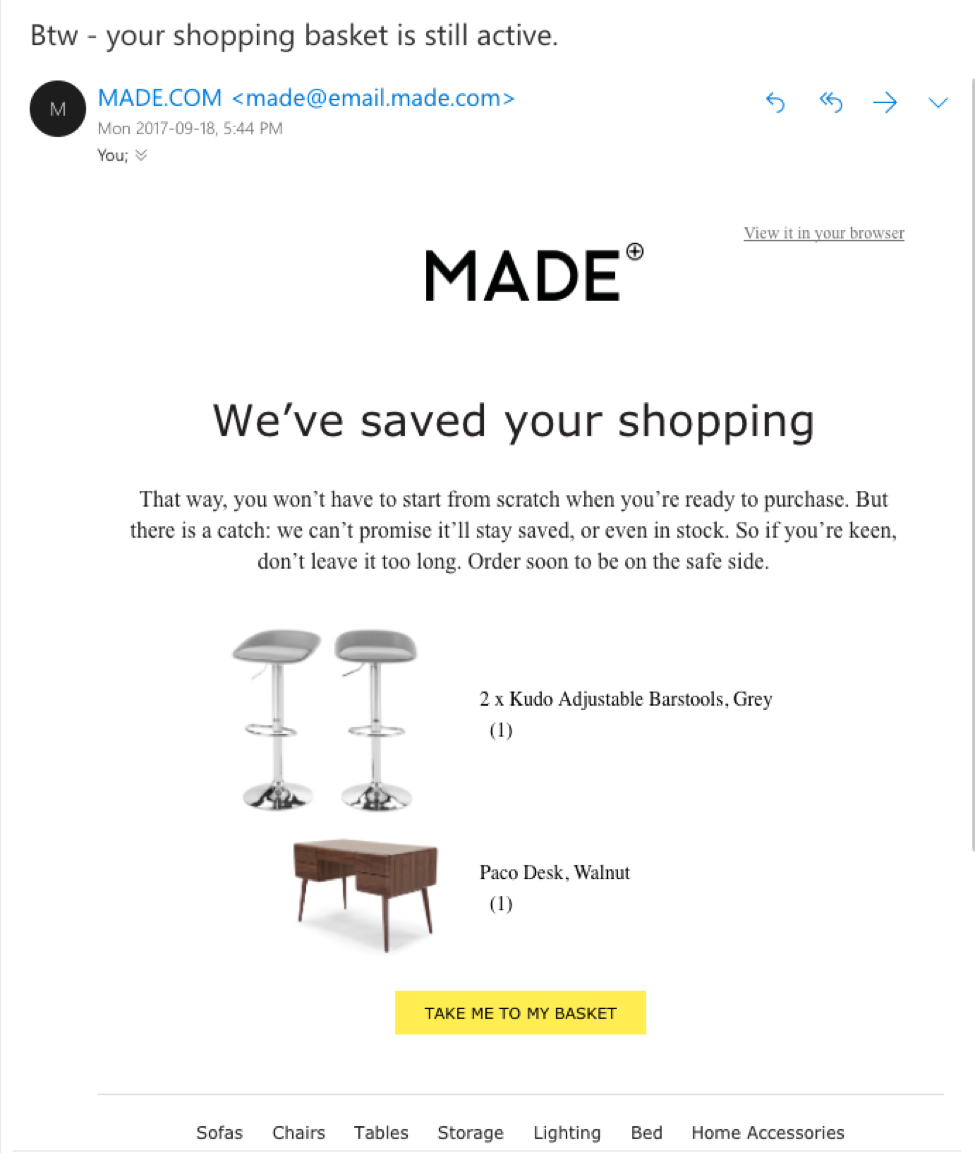 MADE.com makes it clear which products were in the cart and the multiple, bright CTA buttons make it easy to return to their website.

4. Have a Clear Call to Action

Calls to action (CTAs) on cart abandonment emails need to be relatively straightforward. There’s usually two related goals - to get users back to your website and to complete their purchase. Effective CTAs should be prominent and use clear phrasing like: 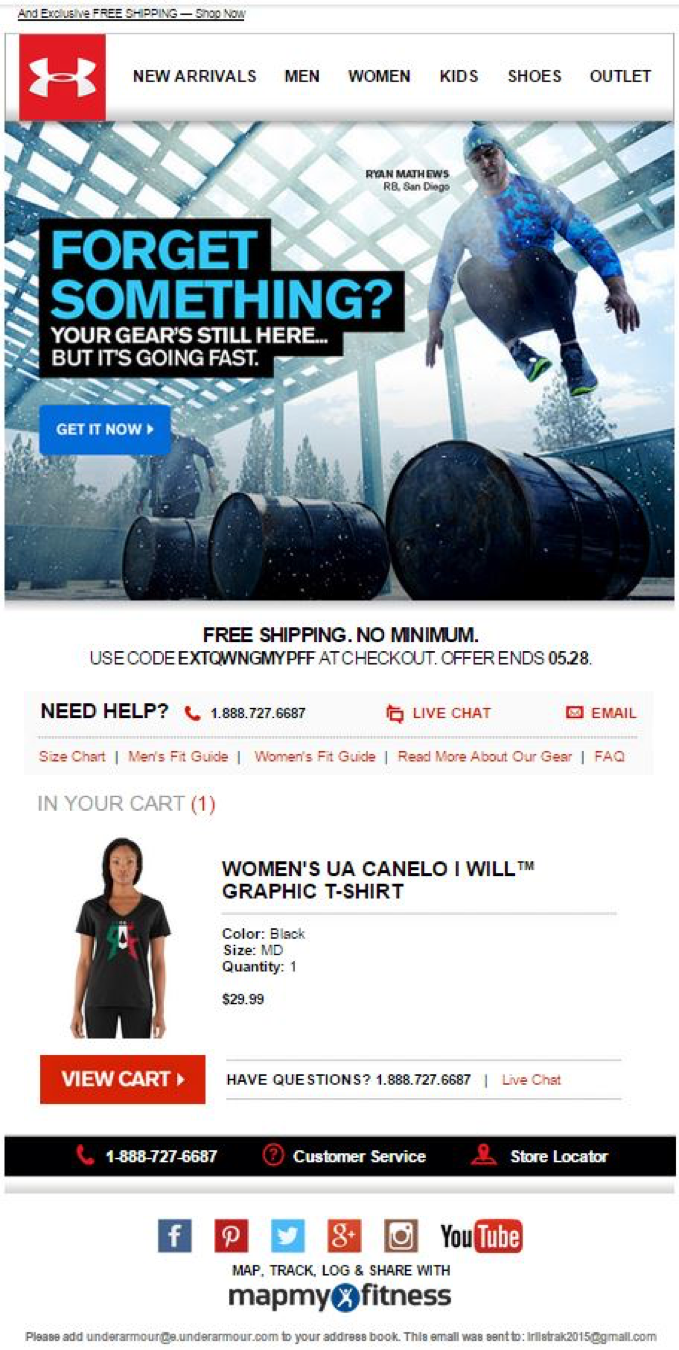 Under Armour does a good job including multiple CTAs with one prominently displayed in an already eye-catching header image and another directly below a large image of the product. Both buttons are large, hard to miss and located in logical places within the email.

5. Give an Extra Push

The top reason consumers abandon carts is because the final cost is too expensive. Including an incentive with your order may work to overcome lingering buyer hesitation.

This email from NOMAD below makes it clear right from the beginning that they’re willing to be flexible on price with their personalized subject line. The 15% off coupon they do offer is also a large enough discount to be enticing and, at the bottom of their email, they highlight their free shipping policy. 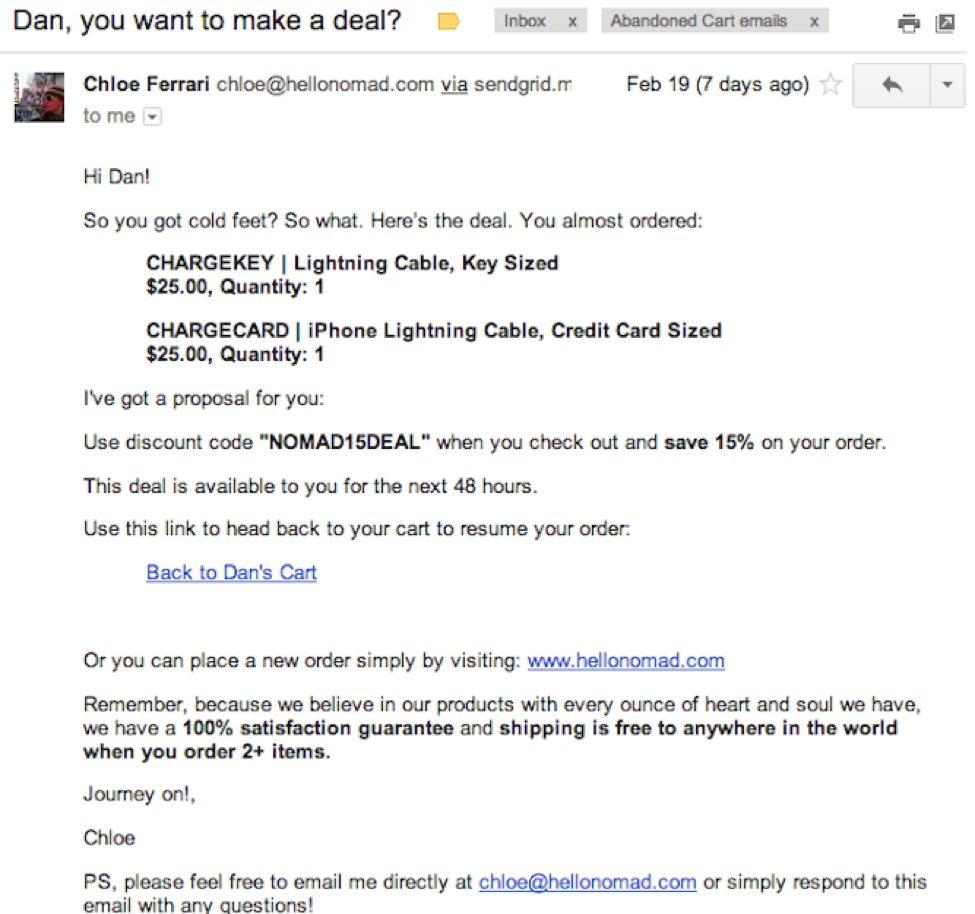 Quickly, NOMAD has taken care of the two biggest pain points cart abandoners have and greatly increase their chances of winning back that business in the process.

Don’t Miss Out on Revenue

More Great Resources From Around the Web