The future is looking more mobile for ecommerce marketers.

Q2 2018 marks the first time mobile paid search advertising has surpassed desktop. Mobile’s 48% share compares to a 44% desktop share, with the remaining 8% accounted for by tablet spending, according to a study by Kenshoo which analyzed over 500 billion impressions and over $6 billion in advertiser spending. These findings now make mobile the leader in both paid search and paid social spending. 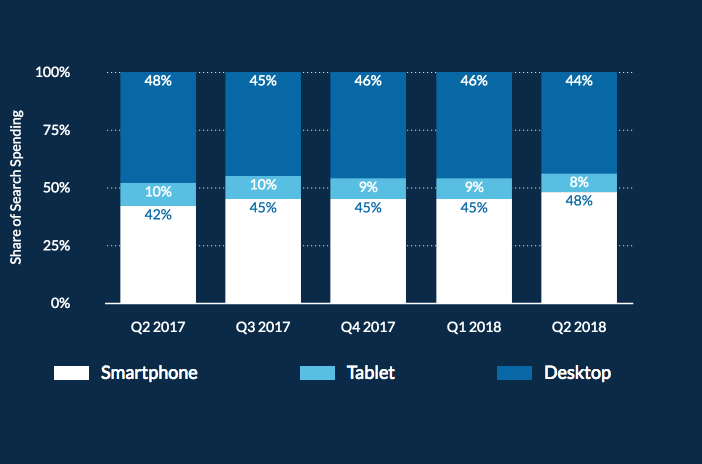 A portion of this 6% year-on-year growth can be attributed to advertisers increasingly utilizing mobile shopping ads; however, these strong gains can be more broadly attributed to the continued adoption of mobile as a platform for all forms of media, at the expense of both desktop and tablet utilization.

Some estimates predict that by 2020, mobile paid search advertising spend will be double that of desktop, and represent 30% of global ad expenditure, despite yearly mobile ad spending growth projected to slow to 21% from 35% in 2017. As it stands, mobile search spending has been growing at over twice the rate of aggregate search spending.

Social spending on mobile also saw gains in Q2 2018, reaching over one and a half times the spending volume of the same quarter in the previous year. A main driver of the growth in mobile social spending have been product ads, which made up 20% of overall social spending. Other notable social trends have been the significant increases in year-on-year social clicks and click through rates, up 94% and 69%, respectively.

The increasing importance of mobile as an advertising platform means there’s more businesses establishing a presence in the space than ever before.

For ecommerce businesses, this means it’s crucial to stay competitive on mobile. Ensuring websites, landing pages, and carts are optimized for mobile will leave you in a great position to capture the increasing number of mobile shoppers and continuing to dedicate more resources to mobile advertising on social media and paid search will help capture more mobile users.

If you need a refresher on some of the key mobile best practises, we’ve highlighted five key elements to focus on.