Necromancy for Fun and Profit: 4 Ways to Revive “Dead” Users

Experienced SaaS entrepreneurs know that the real money is in customer retention, not new customer acquisition.

At the same time, in a typical SaaS company, about 25-50% of the entire customer list would be considered “dead” or “inactive”. These customers might have dropped out of a free trial, switched to a different platform, or simply stopped using the software after a few months.

Put two and two together and it becomes obvious that these inactive customers present a great opportunity. Re-engaging them is likely to be a lot more cost-effective than marketing to entirely new customers – if you do it right.

Here are four ways to help revive your “dead” users:

Discounts are a very effective way to re-engage lapsed customers. Experian conducted a study of 44 clients sending reactivation campaigns, and found that adding an offer to the subject line consistently boosted engagement rates.

However, used incorrectly, discounts can also de-value your offering and attract bargain hunters who won’t stick around for the long-term, causing significant harm to your business. In fact, research by Price Intelligently suggests that inappropriate SaaS discounting can reduce LTV by over 30%.

So how can you leverage discounts effectively while protecting your unit economics? One good way is to only offer discounts to customers who have already made a purchase in the past, while skipping over those who have only used a free trial. This will allow you to avoid bargain hunters while re-engaging legitimate paying customers.

Here’s an example from ClassPass: 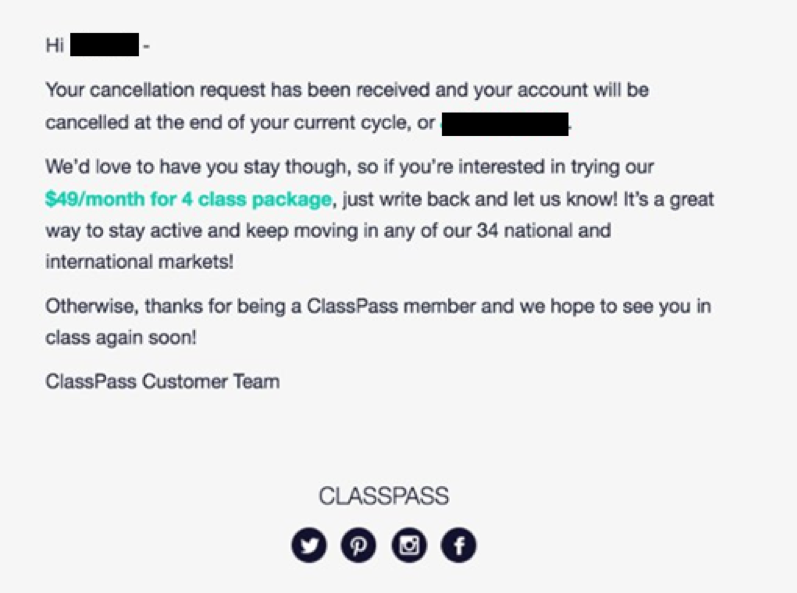 Not only does ClassPass exclusively target paying customers who are cancelling their membership, but their discounted option also only applies to a limited 4-class package. This allows them to preserve the value of their standard unlimited membership, while providing a more suitable option to customers who can only attend classes occasionally.

Often, customers will churn because your software lacks a specific feature they need.

That’s why you should make sure to update your inactive customers every time you introduce a major feature update. There’s a good chance some of those users will re-activate their accounts because you’ve just implemented the exact functionality they’ve been waiting for all along.

Other users might sign on again just to check out the new feature, or because your ongoing updates prove that you’re committed to making the product better over time. Whatever the reason, each major update is another opportunity to re-capture some portion of your dormant customer base, and you should be sure to make the most of it.

Grammarly hits the mark in this update email: 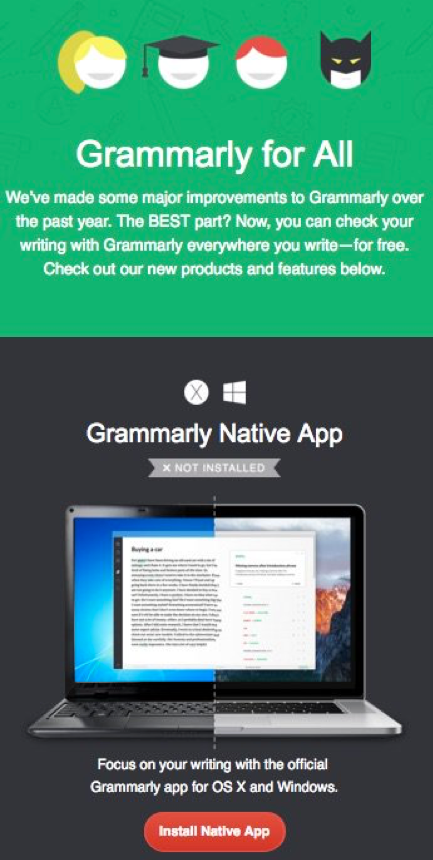 The email succinctly summarizes the main benefit of the new updates, then points users to one simple call-to-action – installing their native app. Since feature updates tend to attract a lot of curiosity-driven re-activations, such convenience is essential to a successful campaign.

Requesting feedback from inactive customers is not only a good way to identify areas for improvement, but can also be an effective re-engagement tool.

After all, your customers must have had good reasons for leaving your service. So there’s a good chance that many of them would like to tell you how you can serve them better. By giving them an opportunity to do so, then taking concrete action to implement those improvements, you are providing them with some very good reasons to come back.

The important thing is to keep things simple. You don’t want to drive your lapsed customers even further away, and besides, feedback doesn’t have to be complicated to be useful. For instance, here’s an excellent feedback campaign from OFFICE: 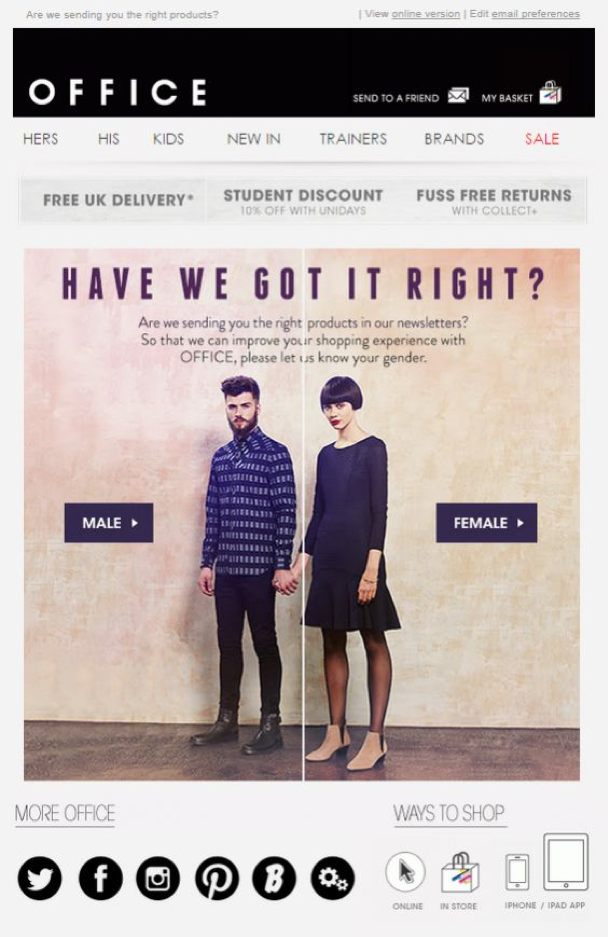 Just one question: are you male or female? While that might sound laughably simple, the truth is that many marketing campaigns fail because the emails are irrelevant to the reader. By asking for the customer’s gender, OFFICE will be able to cut out half of their catalogue in future promotional emails to this customer. That can be very powerful for both short and long-term re-engagement.

There is great value in building desktop or mobile notifications into the natural user flow of your software. These regular alerts give you a natural way to prevent lapses in engagement, without relying on your users to log into their accounts every day. 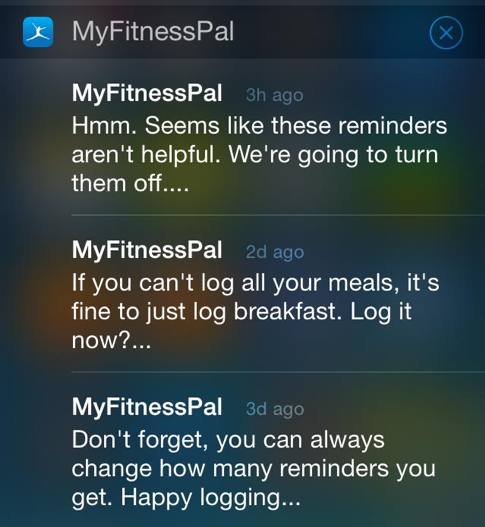 Note how these notifications never seem spammy. They’re only sent once a day for three days, after which the app itself will stop sending them without any action from the user. The request also changes with each reminder, reflecting the reality that life can sometimes get too busy for detailed calorie tracking. As a result of this highly empathetic design, the notifications always seem genuinely useful, rather than intrusive.

At the other end of the spectrum, some software solutions are designed to work in the background with minimal user involvement, and so every notification is essentially a re-engagement attempt. For instance, Dropbox sends a regular desktop notification to users who have almost used up all their existing storage space: 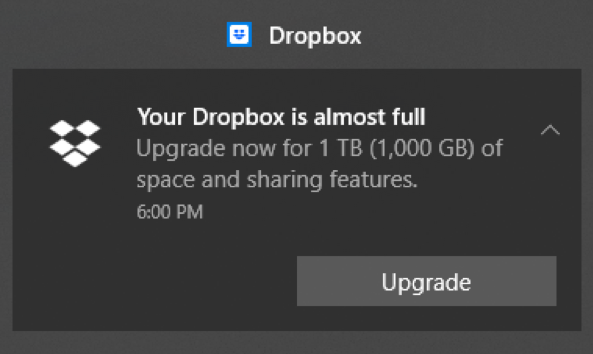 Just like MyFitnessPal, Dropbox’s notifications add real value because users don’t want to be caught unawares by a sudden lack of storage space. The notification also provides a convenient “upgrade” button to make the process as easy as possible. This simplicity is a big part of the reason why Dropbox manages an industry-leading 4% free-to-paid conversion rate.

Bring Dormant Customers Back From The Grave

Think of it as remarketing to the most receptive audience ever – those who have already given you money to use your product in the past. It really doesn’t get any more targeted than that.

By integrating these techniques into your regular marketing program, you’ll be able to increase your active customer base and expand revenues at a fraction of what you would usually pay for brand new customers.