Despite a controversial year for Zuckerberg and his team, Facebook still capitalized on ad revenue and experienced exponential growth in 2018.

The way Facebook manages its users’ data seems to be a secondary concern when it comes to advertisers, as they not only continued to pump their digital ad budget into Facebook’s various social platforms, but they invested more than they ever have before. The company recently reported that their revenue hit $16.9 billion in Q4 2018, an increase of 30% year-over-year. Additionally, their net income soared 61%, to a record-breaking $6.88 billion last quarter.

From a geographical standpoint, North America remains to be the most dominant realm when it comes to Facebook users, with nearly half of its overall revenue coming from the United States and Canada. 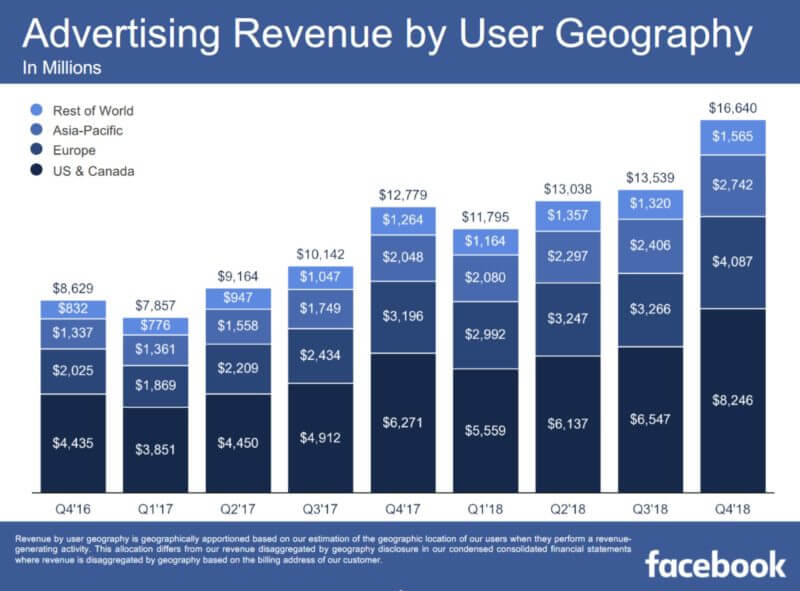 In a recent statement during the report earnings call, Facebook’s chief financial officer David Wehner claimed that the average price per ad decreased by 2% in Q4 2018, with overall ad reach increasing by 34%, thanks largely in part to Instagram. Wehner also revealed that 93% of the ad revenue generated in the final quarter of 2018 came from mobile advertising. Both of these factors tie back to the Stories ad format, which – since the company “borrowed” the idea from Snapchat and applied it to the Instagram platform – has been a major contributor to the 43% year-over-year growth in advertiser spend on the channel. Additionally, 500 million daily users are now posting and consuming Instagram Stories.

“Obviously, we believe we’ve got the best advertising products out there in terms of being able to deliver measurable business results to clients. And so we think that does help us in that environment,” Wehner said.

While Facebook did not specific precisely how revenue from its Stories format is being attributed (as it’s not only available on Instagram, but also on its native platform), the company did announce that there are a combined two million advertisers currently deploying Stories ads.

As mentioned earlier, 2018 was a particularly difficult year for Facebook. The company dealt with a number of privacy scandals and accusations that it has been sharing user data without consent to third parties.

Despite all that, the amount of daily active users on Facebook-owned properties like Instagram, WhatsApp, Messenger, and its native platform is on the rise. Q4 2018 saw Facebook’s overall userbase grow to 2.3 billion monthly active users, an increase of 9% year-over-year. 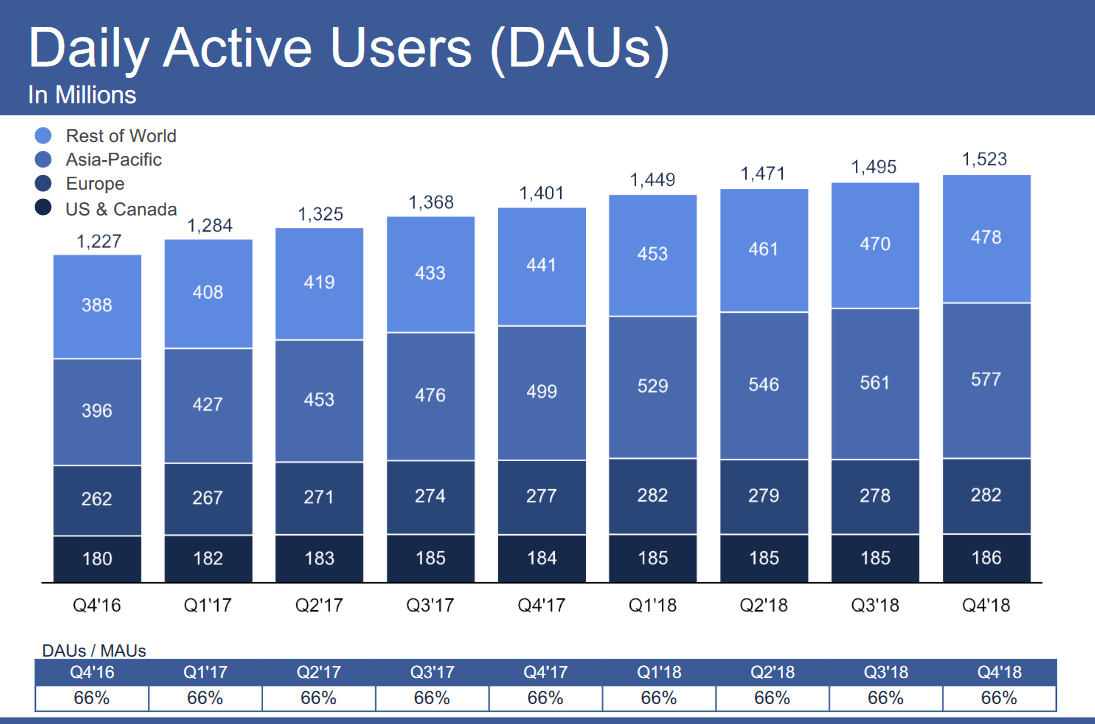 From a marketing standpoint, Facebook COO Sheryl Sandberg stated that the company currently has over 7 million advertisers placing ads throughout its owned properties

Even though Facebook is facing tremendous amounts of competition from the likes of Google and Amazon, as well as some new pressure from fringe channels like Reddit and DuckDuckGo, it’s clear that it still has a commanding hold on the digital ad ecosystem. As it continues to add more functionality to Instagram, WhatsApp, Messenger, and its native platform, it will remain to be a powerful realm for advertisers to get their content in front of a large audience and maximize their return on investment.

We’ve mentioned a lot that there’s a major benefit to the rising diversification of digital advertising realms for marketers who are looking to try something new and reach a new and potentially lucrative audience, and that is still very much the case.

Having said that however, the above insights really reinforce just how massive a presence Facebook still has in the market, which means there is still very much a need for advertisers to maintain a presence within their properties.

Fortunately, you can still get the best of both worlds. As Facebook releases a variety of new ad formats across its channels, advertisers can continue to reach its massive audience while still experimenting with new techniques.

Whether it’s the new search ads coming to Facebook, or Status ads on its sister platform, WhatsApp, there are lots of new and exciting opportunities to take advantage of this year. Give something new a try while the iron is hot, for you may just be rewarded for your efforts!