Facebook’s been seeing tremendous growth lately, but it hasn’t been with its native platform.

Despite a rocky 2018 for Facebook’s primary social network, it has been a different story for its sister platform, WhatsApp. According to a recent App Annie report, WhatsApp actually surpassed Facebook late last year in terms of highest monthly active users on smartphones, and is now considered Facebook’s most popular social app. 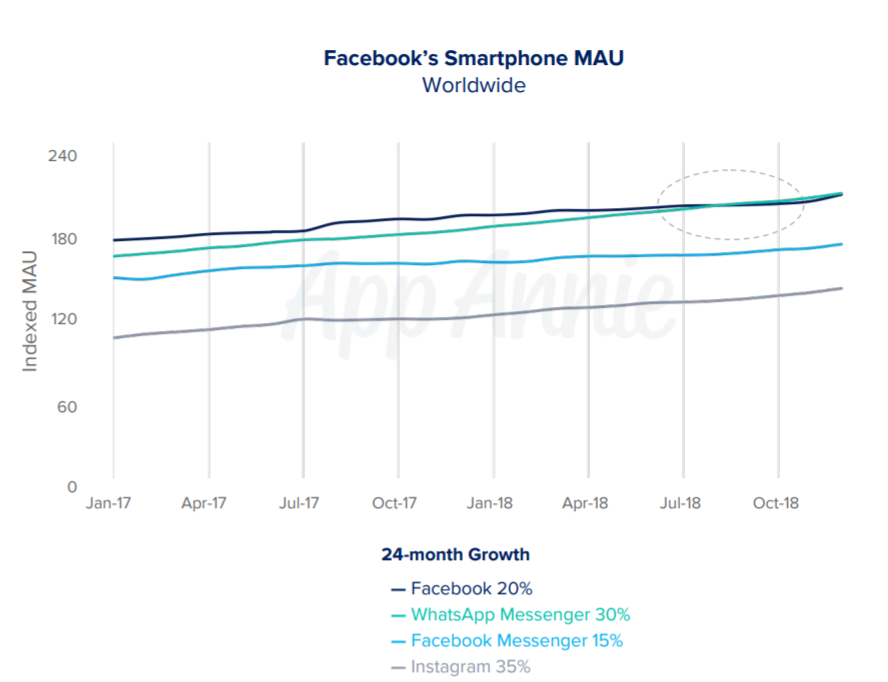 This surge in growth can be largely attributed to its popularity increasing in emerging markets, like Singapore, Hong Kong, Russia and Malaysia. It’s worth noting that the United States had little to do with WhatsApp’s rise to the top. In fact, WhatsApp didn’t even rank in the top 10 when it came to which social applications Americans most often use.

While it’s been a particularly rough past year for Facebook with ongoing privacy scandals and a lack of transparency with how it manages and shares user data, the reality is that the tech giant still has a commanding hold on the social networking realm. The company currently owns four of the five most highly-used social networks, with WhatsApp, Messenger, Instagram, and its native platform.

It’s interesting to note that – unlike Facebook and Instagram – WhatsApp offers a stronger encryption method, meaning Facebook has less visibility on what it can record and monitor when it comes to user messages. In a time where more users are opting for more secured alternatives with how they embark on their digital experiences, this could be a significant vantage point for WhatsApp to capture an even higher share of users.

Having said that, the numbers suggest that the majority of social users still lean more towards convenience over protection, as the aggregated userbase of all Facebook’s properties has been consistently growing over the past two years.

Another possible cause for WhatsApp recent success is the platform’s lack of advertising, although that is soon going to change.

WhatsApp announced last September that it’s in the process of devising a monetization plan for its messenger platform, including new ways for customers to connect with businesses (and vice versa) and real-time support.

Additionally, in a recent interview with the economic times, the company’s Vice President Chris Daniels proclaimed that it will be soon introducing its version of a Stories ad format within its “Status” section. This announcement comes as mobile advertising formats like Stories gains traction with both brands and consumers.

For advertisers, there’s a lot to take away from these findings.

Firstly, as touched on above, the US doesn’t seem to be a particularly strong market when it comes to advertising on WhatsApp. Of the massive 1.5 billion monthly users WhatsApp currently boasts, only 20 million of them are in the US, meaning that when WhatsApp does inevitably release its Stories ads, your US ad-spend should likely remain allocated to other social alternatives (although this also means that competition could be much lighter).

When it comes to other markets however, there definitely seems to be more of an opportunity for those who can roll out some WhatsApp campaigns and quickly make a positive impression. When we attended Affiliate World Asia back in December, we were completely blown away by how quickly the Asian market is growing in the digital advertising ecosystem. Considering this and the fact that WhatsApp’s major market contributors are in primarily Asian markets, it would be very prudent to include WhatsApp as part of your localization strategy if you’re driving traffic in those geos.

Leveraging the WhatsApp medium should be relatively simple too. It’s widely believed that management of these ads will be dealt with via Facebook’s Business Manager, meaning there likely won’t even be the need to set up a new advertising account. You’ll be able to jump right in if you’ve been running Facebook and Instagram ads already.

Also, if you’re already running Story ads via the Business Manager, you’ll likely be able to apply those exact same ads to WhatsApp users in your location targeting settings (although you’ll obviously want to make sure they’re relevant for the Asian userbase if you’re planning on using North American ads for a new market).

With 450 million people actively browsing WhatsApp’s Status section, the opportunity is ripe for affiliates and advertisers to capitalize, so hop on the wagon and share your success stories with us!