Home › Blog › Which SaaS Pricing Model is Right For You?

Which SaaS Pricing Model is Right For You?

As a SaaS provider, a well-designed subscription pricing model is essential to your growth and success. While each SaaS company seems to have its own unique pricing method, most of these are ultimately variations on four basic models.

In this article, we’ll take a look at each of these pricing models, and discuss the pros and cons of each.

The most straightforward SaaS pricing model is a single flat fee, charged on a recurring (usually monthly or yearly) basis.

The appeal of this model lies in its simplicity: you’re selling one software solution with a fixed set of features and charging all customers the same price. For a startup or small company, this can be a very appealing arrangement.

Firstly, it’s much easier to explain to customers and this can be an advantage in a crowded online marketplace. Since many SaaS subscriptions can get very complicated, a pricing model that’s easy to understand can have intuitive appeal to online prospects who are comparing several different solutions.

Secondly, a single flat rate offer is much easier to sell online, which can be important on a limited marketing budget. Instead of trying to speak to many different customer groups, you can focus all your energies on one focused slice of the market, which can make it easier to gain traction.

However, this simplicity can be a double-edged sword. Since there is no variability in your pricing, there will be no way for you to capture value from customers that are willing to pay more, or those who use your software more heavily. This will cause you to lose out on a lot of potential revenue, especially if you have enterprise customers.

In addition, you also won’t be able to tailor your offering to the specific needs of different customers, which could unduly narrow your total addressable market.

For these reasons, the flat rate pricing model is not very popular among SaaS companies. In fact, it’s hard to find any prominent examples of this model in action. It is instead most commonly used in plugin ecosystems like those for Shopify and Wordpress. For example, Smar7’s Bundle Upsell plugin for Shopify offers flat rate pricing of $47 a month for full access.

The first of the variable pricing models, the usage-based model, ties subscription cost directly to the customer’s utilization of the service. This means that the monthly bill can vary over time – use more of the service and it goes up, but use less in a given month and it will go down.

There are a number of advantages to this pricing model. First, new customers will enjoy a much lower barrier to entry. Even the smallest customers can sign on and start using your service, because they only need to pay for what they can reasonably use. Second, there is built-in revenue expansion, since monthly fees will grow as your customers use your service more. Since your existing customer base is your best source of incremental revenue, this combination of easy entry and high scalability is a very appealing one for any SaaS provider.

The main downside to this approach is that it can be very difficult to predict prices over time. That’s significant for both the provider and the customer. From the provider’s point of view, SaaS companies are critically dependent on recurring revenue for cash flow. With a usage-based model, a few low-activity months could cause challenges, especially for smaller companies. Meanwhile, on the customer’s end, being unable to budget for one’s monthly expenditure in advance could be seen as a major disadvantage, possibly even a deal-breaker. This could make it a lot harder to sell your solution to customers who require more predictability.

Historically, the usage-based model has been most commonly seen in utility-like SaaS platforms that facilitate technical or back-end functions. These include data services, cloud storage platforms or payment and billing software. However, due to the versatility of the model, it is also increasingly being adopted by companies offering more visible functions like social media management or customer success.

The second type of variable pricing model is user-based pricing, also known as “per-seat pricing.” In this model, customers pay a flat fee for each user on their account.

User-based pricing is very popular among SaaS companies for several reasons. First, it is simple and transparent, as it provides a single fixed fee per user. This makes it easier to explain and sell to customers. Second, like usage-based pricing, it allows for revenue to grow alongside customer adoption. This happens on its own, with no active customer upgrades required. Third, unlike usage-based pricing, it provides much more predictable revenue, as the number of monthly users tends to be a lot more stable than actual monthly usage rates.

At the same time, however, user-based pricing is not without its disadvantages. For one, it provides a disincentive to user adoption. Since customers have to pay for each user, many will try to limit the number of users, or even find ways to get around the system, such as by sharing accounts across multiple users.

Since customer loyalty is often positively correlated with the degree of internal user adoption, this can easily lead to another, even more serious problem, which is increased churn. The worst part is that the risk of churn is highest with your biggest customers, since a company with 1000 users will be paying much more than a company with ten. If not managed properly, this could result in significant lost revenue and cash flow instability.

Notwithstanding these downsides, the simplicity and scalability of user-based pricing has made it the most popular model in SaaS, with 36% market share according to the 2017 Pacific Crest SaaS survey. Salesforce is the most prominent example of this model, with per-user fees varying based on feature tier. 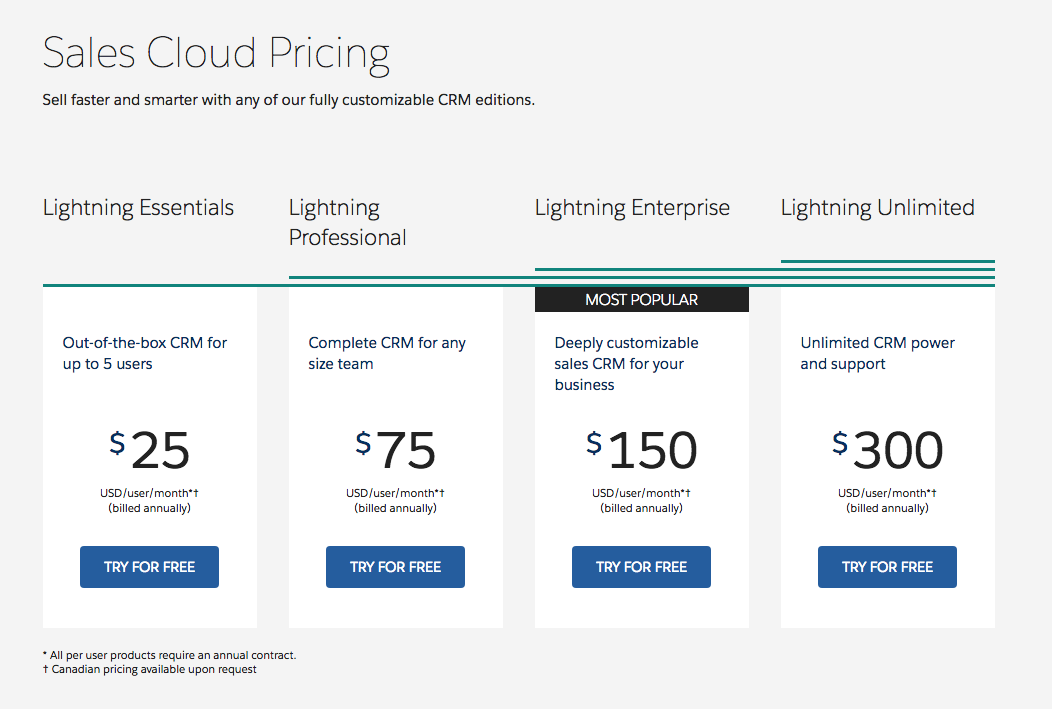 The third type of variable pricing charges customers based on the features they use. This is most commonly implemented by dividing the offering into multiple “tiers,” with each tier offering a different combination of features at a distinct price point. In some cases, companies might also charge separately for individual features, which can be purchased as add-ons to the core software, though this is less common than a straightforward tier-based system.

Feature-based pricing is a very popular SaaS subscription model, and for good reason.

First, it offers the ability to appeal to multiple buyer personas. Since each tier includes its own unique combination of features, your sales and marketing teams can thus target each tier at a different segment of the market – for instance, selling your entry-level offering to startups, while tailoring your high-end offering to enterprise customers.

Second, once customers have signed on at a particular tier, there is a clear upgrade route over time. As a result, it’s easier to convince customers to grow their spend as they increase their usage of your software.

Third, this model gives you the option of including a free tier with limited features. This “freemium model” can be a great path to rapidly gaining traction with new customers, especially if your software enjoys network effects. Free programs should certainly be managed with care, as they can become a massive cash drain if not enough free users convert to paid subscriptions. However, if used appropriately, they are among the most powerful tools for organic viral growth.

On the other hand, tier-based differentiation also has its challenges. The biggest issue is that it creates a lot of upfront complexity for the customer, since they not only have to choose your software, but a specific version of it. This can present a marketing “hump” that makes it harder for customers to take action and sign on with you.

In addition, there’s the danger of making this problem worse by trying to cater to too many different buyer personas at the same time. If not managed properly, this could make things even more confusing for all your customers, as they will not be sure if you can meet their specific needs.

Leadpages is a good example of the feature-based pricing model. They offer a Standard, Pro and Advanced plan, depending on the software features and level of support customers need. They also offer discounts for signing up for an annual or 2-year package, which is a common practice with this model.

These have been four basic pricing models used in almost all SaaS subscriptions today. These are not hard-and-fast categories by any means and many SaaS companies use a combination of several models to achieve their perfect pricing mix.

Don’t be afraid to experiment with different pricing models, and make sure to update them as your solution itself evolves. Most importantly, always ensure that customers are getting good value for the price they’re paying.

If you liked this article, download our free ebook, "The Ultimate Guide to B2B SaaS Pricing."